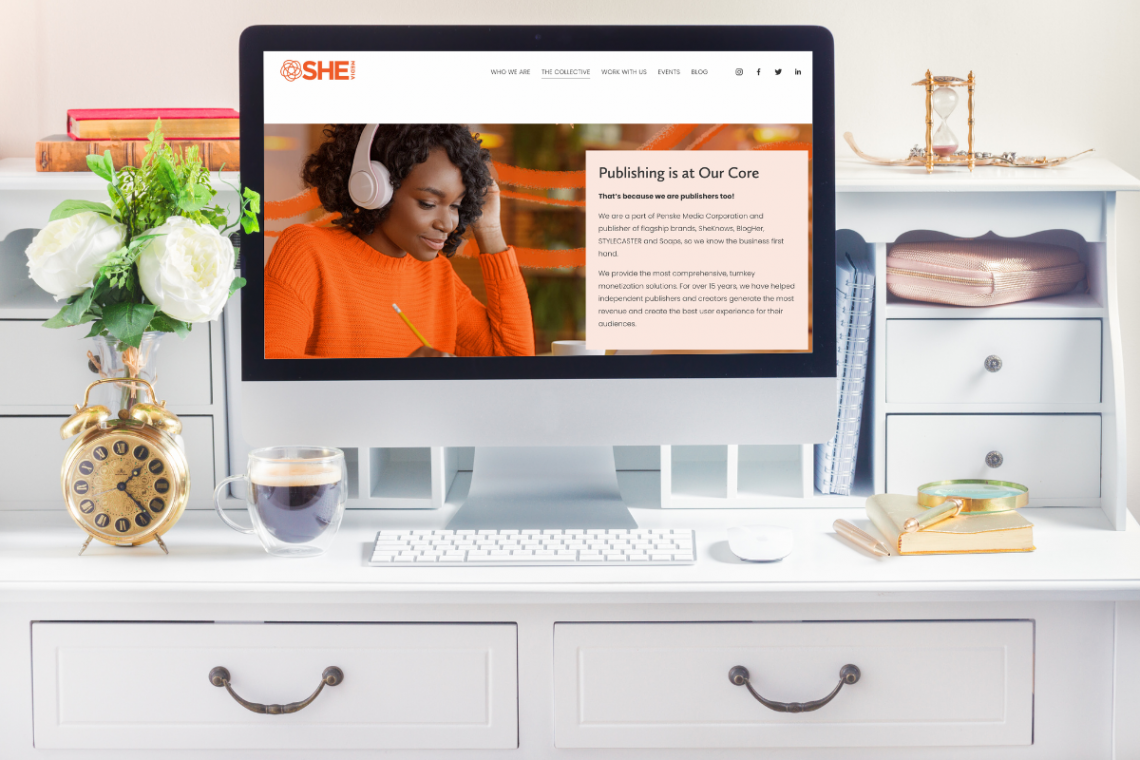 For many bloggers and site owners, reaching the level of traffic where you’re able to start running ads is the first step in living “The Dream;” it’s a chance to start earning income passively and perpetually for work you’ve already done. It’s that first paycheck from an ad network that makes you realize decoupling your time and earnings is possible – and blogs or websites are a great way to do it.

I’ve always been a big advocate of running ads on your site as soon as you’ve started getting enough traffic to meaningfully earn something back; in your early days, you should focus on growing your traffic through high-quality, SEO & EEAT optimized content, then monetize that traffic with ads and affiliates.

But choosing an ad network can be tricky: everyone has an opinion, and everyone is biased because you can really only run one ad network on your site at a time. Whatever you’re currently earning from is probably going to be your favorite! I’ll admit that I have that bias, though I actually run sites on two different ad networks as of publishing this post (Mediavine and SHE Media).

I’m going to focus on this latter company in today’s review, to help you understand what the SHE Media Collective is and whether they’re a good ad network to apply for, once you meet the criteria. After reading this SHE Media review, you can decide whether you want to try this mid-level ad network, or hold out and keep working to reach Mediavine or another premium network.

Basics of SHE Media Collective

If you’ve made it to this review, you might already know what SHE Media is, and just want to know if it’s a good option. But if you’re totally new to running ads on your site, here are the basics.

SHE Media – formally called “SHE Media Collective” – is an ad network. This means that if you apply and are accepted, they will install a code on your site that runs ads.

These ads are generated programatically through bidding and such; I’m fairly certain it relies on the Google Ad Network. This means you don’t have specific control over which ads show up on your site, where, or how much you earn for those ads.

SHE Media is a great option if you’re just getting started running ads on a smaller site, since they have a lower traffic minimum than other “premium” ad networks like Mediavine and AdThrive.

SHE Media RPMs: Experience with my Sites

As of writing, I have three sites running ads on SHE Media. Here are the session RPM ranges I’ve seen:

All this to say, RPMs on SHE Media aren’t great. $15.19 would be unacceptably low to me for any of my sites on Mediavine.

Speaking of… I can compare RPMs on two of my sites: London On My Mind and Eat Like Bourdain, both of which I started on SHE Media then moved to Mediavine.

For London On My Mind, SHE Media ads ran for several months in late 2021 and early 2022 before my traffic improved enough to apply for Mediavine,but it was worth the effort:

This was an 86% improvement in earnings by switching, which was well worth it for that site.

I started running ads on Eat Like Bourdain and almost immediately qualified for Mediavine, so I switched over as quickly as I could. That means I didn’t give SHE Media ads enough time to optimize, but it’s still worth comparing the RPMs between the two networks:

This underscores what I’ve always thought internally, which is that you should switch to a better ad network (like Mediavine) as soon as you qualify.

Other Aspects of Running SHE Media Ads

RPMs are obviously an important part of choosing and sticking with an ad network, but they’re not the only factor. By using a few different ad networks, I’ve learned that I’m happy to earn a bit less for a better experience (so all those annoying emails from Ezoic promising 25% improvement in ad rates do nothing for me because I’ve tried them and they’re terrible to work with!).

Here are the basic criteria for applying to SHE Media:

And you must agree to exclusivitiy on SHE Media (meaning you only run their ads). This is a lot – but nothing that unreasonable. Additionally, I’m pretty sure that they raised the traffic criteria from 10,000 to 20,000 during the pandemic (just like Mediavine did with their traffic minimum) which is really frustrating for smaller publishers.

I have to cut SHE Media slack though – a lot more publishers are trying to get onto every ad network, and almost all of them have gotten stricter about onboarding criteria and slower to onboard once you qualify.

Once you qualify, SHE Media will assign you a technical person to help get your site through the onboarding checklist (which you can work through pretty easily on your account) and make sure ads are showing properly.

In any case, you should plan to spend 2-4 weeks in the onboarding stage once you qualify and apply for SHE Media.

One aspect of SHE Media that I really don’t like is their 12-month contract. By signing up, you agree to a 12-month contract for showing ads, and the contract renews for another 12 months automatically at the end of each previous 12-month period. (How many times can I say 12 months in one paragraph?!)

Additionally, if you try to leave your contract, usually the support people will let you do this with a two-month penalty window (meaning you have to leave the ads up for two more months after the date you say you want to cancel).

Ad contracts are stupid and basically unenforcable since sites go down and expire all the time, so it’s stilly for SHE Media to bully people into keeping their ads up.

I’ve broken my contract with SHE Media twice now (for London On My Mind and Eat Like Bourdain): the first time, I fulfilled the two-month penalty, and the second time, I turned off ads after one month and nobody ever said anything.

I’d love to see SHE Media get rid of the contract entirely and create a loyalty bonus instead – like Mediavine has.

The SHE Media dashboard is sufficient but absolutely nothing special. You get three reports:

*I took a peek at my Google Analytics compared to what SHE Media was reporting and SHE Media was just… wrong? So I’m not sure where they’re getting this data, but I wouldn’t trust it for any reporting.

I only ever look at the Revenue report, since RPMs are the most important metric your ad network provides – however given the fact that I now know the Traffic metrics are just made up, this report isn’t helpful to me either beyond reporting baseline revenue.

Admittedly, ad tech is a bit of a black box for website owners and bloggers: we turn it on, but have very little idea how it works. For the most part, it’s the same experience with SHE Media.

You do have control over certain topics of ads, and can turn of ads from alcohol, diet industry, military, dating, religious, political, cannabis, and tobacco advertisers. This is a smaller list than I’ve seen from some other publishers (notably Mediavine), but it covers most of the primary topics you might want to (not) show on your site.

Additionally, there are a few other ad controls: you can choose which standard size ad units to show or not show, such as “medium rectangle,” “flex banner,” and “wide skiscraper.” I only have about half of these turned on for my sites, though SHE Media does have a set of recommended ad sizes you can run, if you just want to “set it and forget it.”

There are also controls to allow SHE Media to optimize your ads, and turn on/off the “Tune-In Bar,” the “Mobile Adhesion Unit,” and the “Scroll Stop Ads.” My biggest complaint here is I don’t know what any of those ads are. SHE Media could do better to explain different ad sizes and placements as part of onboarding so you know what you actually want to show. (I have optimization on but all other special ads turned off because I think they’re ones that take over the site, especially on Mobile, and I hate those.)

At first, I called this section “customer support,” before realizing that I’m not actually a customer of SHE Media – I’m a partner in growing both of our businesses by running ads. (This is a dynamic you should always remember; ad networks need us as much as we need them.)

In any case, I switched it to “publisher support” since that’s a more realistic way to talk about the support you might need if you’re running ads on SHE Media.

Here are the basics:

While I don’t love the online-only support model (as opposed to having online support for certain issues or emergencies), it works well enough for the vast majority of issues anyone might have.

One area where SHE Media could improve is in follow-up after issues are resolved (or not). Several times, I’ve had issues and asked for resolution; instead of getting an email or chat note that my issue is resolved, I just log into my dashboard to discover the thing is fixed. (One example was when setting up ads on Great Plains Travel Guide, I never received notice that ads were actually running after months of working to get them set up.)

SHE Media Review: Is It Worth It?

While the RPMs are nothing to write home about and I don’t really earn very much for the sites I’m running on SHE Media, I plan to continue using them for my smaller sites that I already have set up on their platform (currently three of them: Follow the Butterflies, Jordan Traveler, and Great Plains Travel Guide). If Jordan Traveler keeps growing, I will eventually migrate it over to Mediavine, though I haven’t seen quite enough RPM lift on some sites to justify it. (I may also try a different ad network so I can review someone else!)

If you’re trying to earn more than you can from AdSense alone or are totally over the baloney ezoic is always trying to pull, the SHE Media Collective ad network is a great option to step up to the next level of running ads. It’s well worth the application and onboarding process to begin earning more and have a company that actually cares about your success alongside their bottom line.

Have any other questions about whether it’s worth it to run ads on SHE Media after reading my SHE Media review? Let me know in the comments!